How to Remove Clear Liner on Waterline Line & Hull Stripes

This follows my step-by-step tutorial on how to apply stripes on a boat. This next procedure gets overlooked 80 percent of the time by boat manufactures and boat owners. It sometimes even fakes me out when this clear liner is on the stripe. I've seen this clear liner on stripes sizes from 3/8" inch to 4" in width -- thats all I work with. But it can also be on other sizes.

When you purchase the stripe, make sure its fresh. In other words, if you see a box of striping tape on a store shelf that has dust on it, pass it by. Striping tape gets old after a year or two, making it very difficult to remove the clear liner. Trust me, it happened to me. Some bigger name companies that supply stripes are: Avery, Spar-Cal, 3M, Prostripe. I have used these companies' stripes and not had any problems with them.

I recall doing a stripe on a customer's boat, while he watched me apply it. When I finished striping the boat, I told him that I'd have to remove the clear liner next. The customer said, "There's no clear covering on the tape," as he was feeling it and scraping at it. Then he watched me pick at the corner to lift the clear liner. He said, "You're crazy. There's nothing there." After about 5 minutes of picking at it, and using tape to lift the corner, I got it. He was shocked when he saw the clear plastic coating come off. For a minute, I was thinking that the tape didn't have a clear liner either! Just goes to show you how tough it is to see and remove the clear liner.

Warning: If you don't have the right tools, or the ability, then do not attempt this procedure.

Do It Yourself Step-by-step Photo Guide: How to remove clear liner on waterline line stripes

Here, you can see how the clear liner is deteriorating and flaking off. 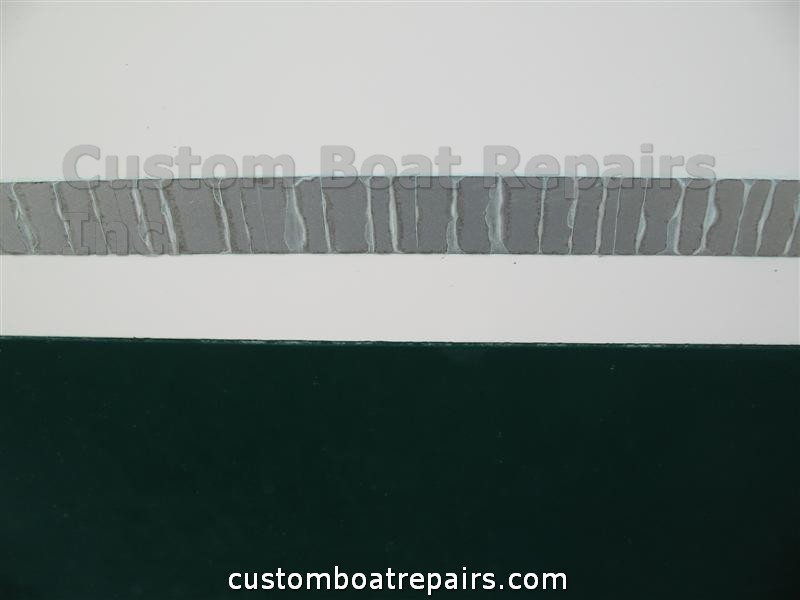 Slits in clear liner. I see this most of the time. 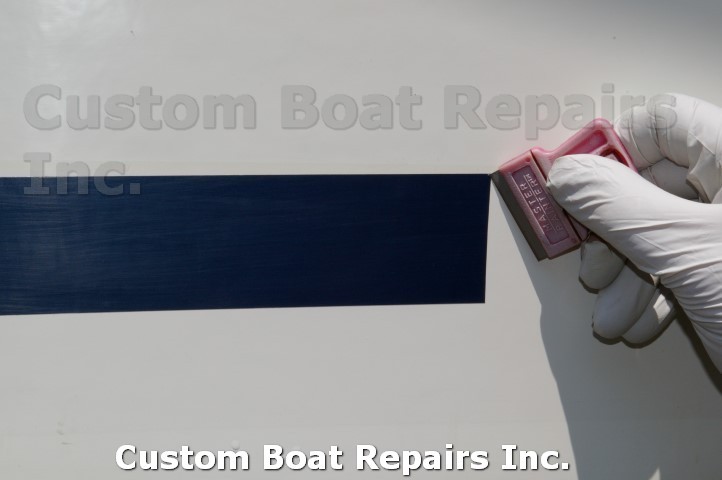 Here, I'm picking at the corner edge to start the lift. TIP: Cut the stripe longer than you need, so when you pick the corner, you won't destroy the good section of the tape. Then cut off the excess tape. 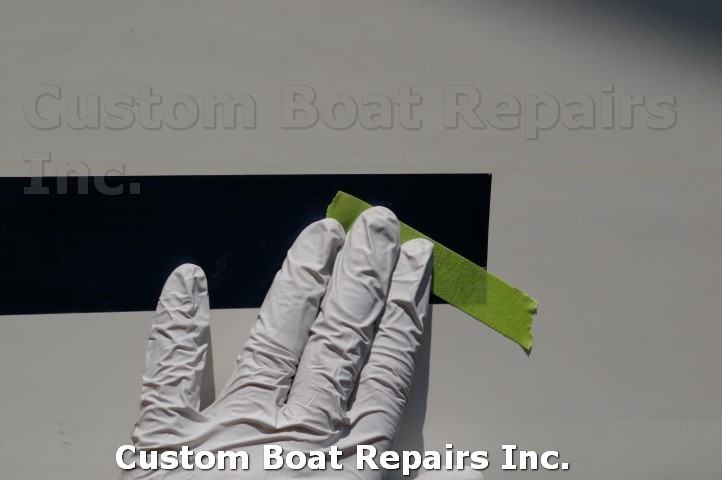 First, you can try putting masking tape on the corner edge of the stripe and start lifting it carefully, to see if the clear liner sticks to the tape (this will only work on fresh tape). If the liner doesn't stick to the tape, then try to lift the corner edge of the clear liner with a razor. If that works, then stick the tape to the razor once it starts to lift, and pull off easily. 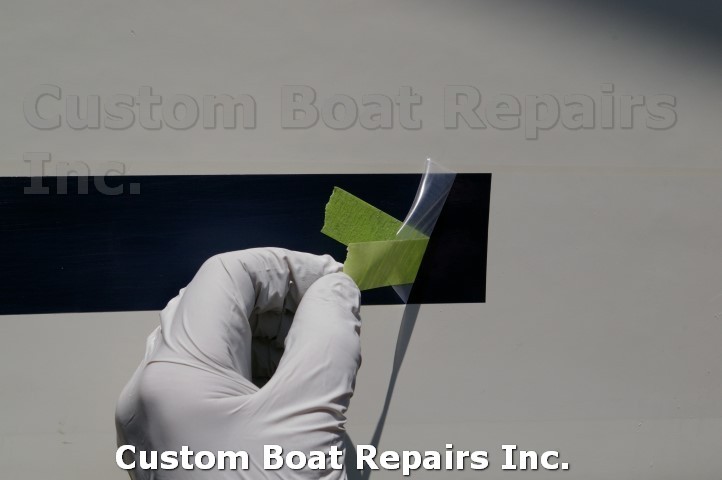 Here you can see the clear plastic liner. 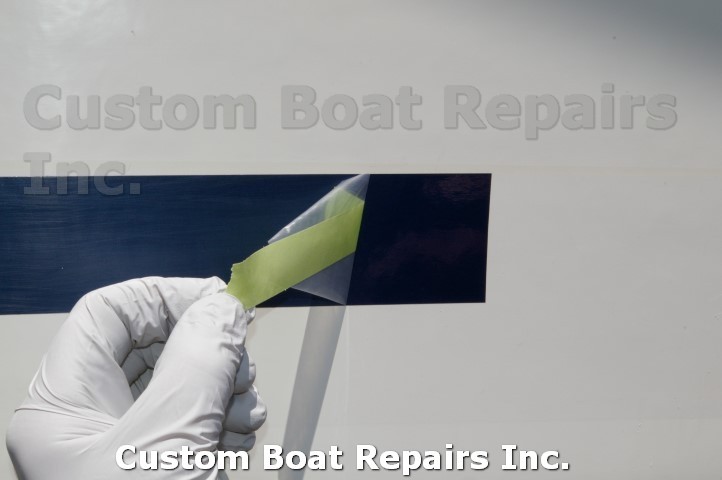 Be careful while pulling it off. If you just applied the stripe and pull too hard, you will pull the stripe right off of the boat. 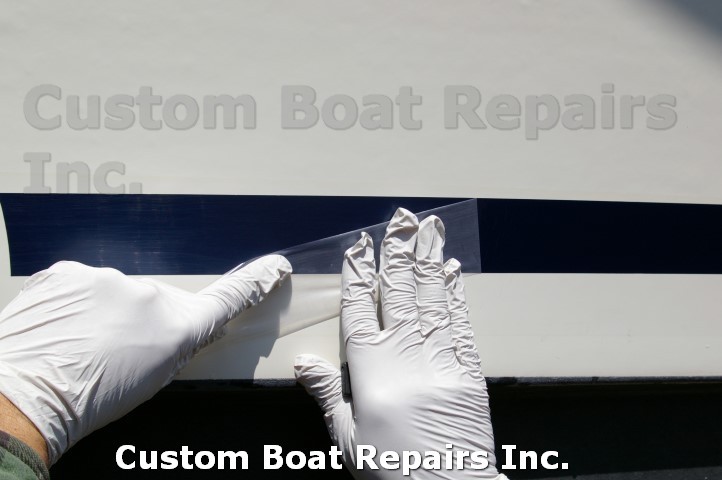 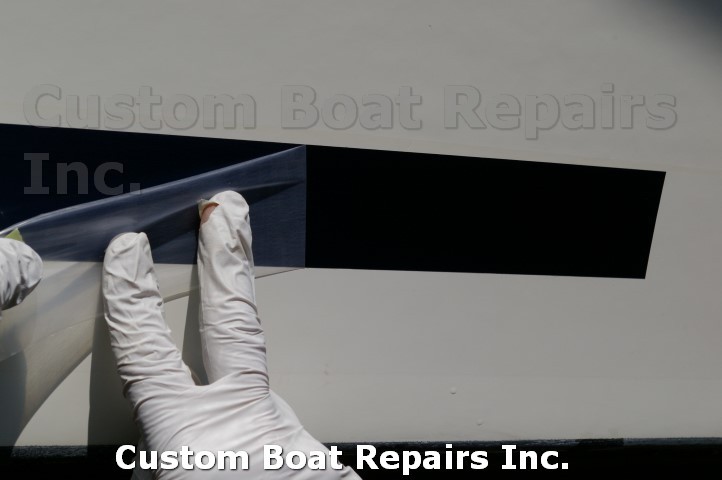 Here, you can see the liner coming off really well. Now, if you left extra tape on the boat to remove the liner like I recommed in photo #3, you can get a straight edge (a 4" metal scraper also works well), and lay it on the stripe at the angle that looks best. Then get a razor and cut it lightly. Be careful, because you don't want to cut into the gel coat.